Throughout the year we happily organize collective and / or monographic exhibitions in the Art Room and outside the walls in exceptional places. On these occasions, we bring artists together around a theme which is important to us and we are showing their recent works. These exhibitions can be seen for several weeks by appointment in the Art Room or open to the public during openings.
UPCOMING - PAST

I always liked the "Support-Surface" movement.

I like the idea of ​​"active" support, that the support of the work does not disappear under the painting and that it becomes even the central element.

At Tanguy Tolila,
- The support of his Open Books - old covers - imposes his trace: play the patina of a binding, let guess a title, bypass a subtle detail to better consider ...
- In his series Cartes, folds and wear of nautical charts come to punctuate the paper and become part of the work.
- In his scores, the notes give the rhythm of the plot and frame the color variations to revive the music.

At Delphine de Luppé,
The medium and its contents become a source of inspiration: a text, a sketch, a plan, a photo, as much starting point to build a series.
- In the series Recoveries, old industrial designs are revived by a composition of repetitive patterns.
- In the Ravalées, the reproductions of sculptures of the Middle Ages are crossed by stylized bridges and the drawing of an architectural masterpiece is completed with the stick of oil in the series Monuments.
- In the Theaters series, an element of an archive drawing becomes the heart of its composition ... with all the originality and poetry that Delphine has already accustomed us to.

Let's go together in search of the time found ...

From January 16 to February 16 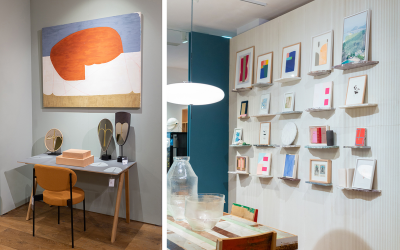