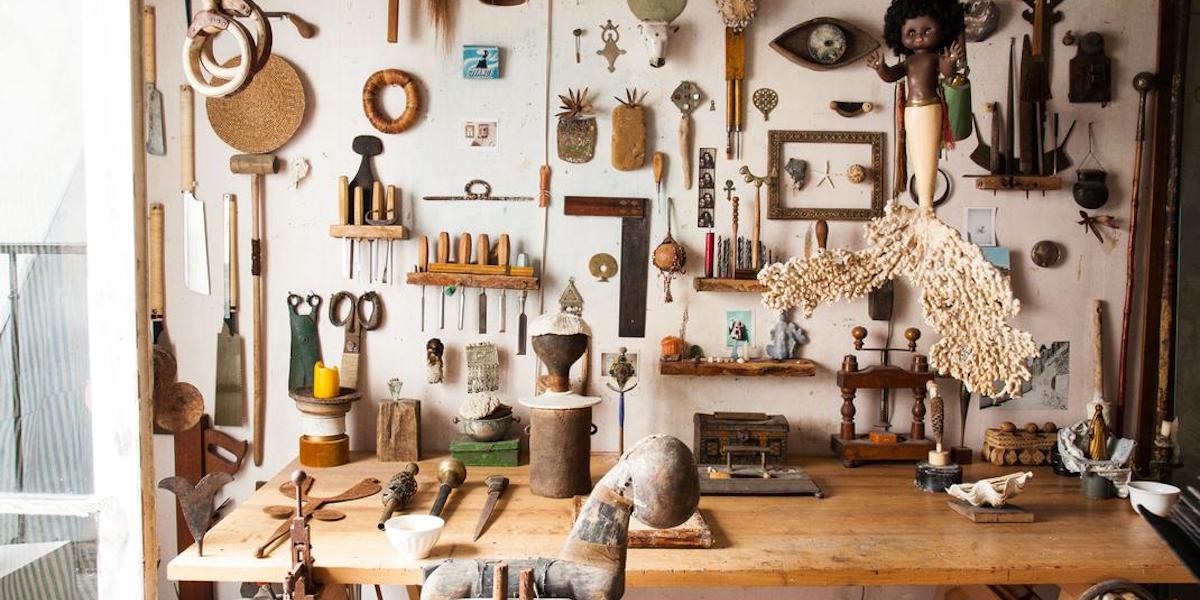 Born in Boulogne-Billancourt on June 22, 1982, Nicolas Lefebvre lives and works in Paris. Lulled from childhood by surrealism, inspired by Breton and Ernst, Nicolas was a compulsive bargain hunter who, at a very young age, scoured auction rooms, flea markets and antique shops in search of materials for his work. At that time, his work consisted of the singular assembly of various objects evoking Arte Povera.

He studied art history at the IESA and at the École du Louvre. Quickly hired by the gallery owner Jacques Lacoste after obtaining his diploma, he undertook a trip to Peru in search of furniture from the 1950s by Jean Royère.

During this expedition, he also deepened his knowledge of what has always attracted him: the primitive, the raw, the naive. Upon his return to Paris, Nicolas met Axel Vervoordt, an antique dealer and art dealer known for his eclecticism and taste. He worked with him for two years, notably at the Biennale des Antiquaires in Paris and at Kanaal in Antwerp.

From 2004 to 2007, he assisted the auctioneer Maître Binoche in the organization of sales of primitive arts (Precolombia, Africa, Oceania,

Amazonia) in line with his research. Thanks to him, he sharpens his knowledge and enriches his own collection of ancient objects.

In 2008, Nicolas opens an art gallery in which he has fun putting together in an unusual way: artworks (Chaissac, Matta, Dubuffet, Calder...), furniture (Adnet, Perriand, Hoffmann...) and curiosities. Self-taught artist, it is in this unexpected scenography of Dada cabinet, that he introduces little by little his creation. Animist, he is sensitive to the presence of the sacred. His talent consists in bringing together all sorts of old objects: rare, precious, or traditional, organic, intimate. Without elitism, these objects are assembled in the form of the cross of life, becoming works that they name his Mother Goddesses. Nicolas claims to be naive and his message is none other than love. Love: one humanity.

In his creative process, he unites Nature with Man (a tree trunk, a whale rib with an 18th century African coin) as well as Man with Man (a 19th century church model dome with an 18th century Ethiopian Koran table). In his hands, the material no longer knows barriers of time or space and symbolizes the union between civilizations in a dialogue of peace. An assertive utopian, this is how Nicolas Lefebvre dreams of reuniting the world.

Since the Poseidon's Necklace, his first monumental work in situ, Nicolas Lefebvre has surrounded himself with a team that brings together the necessary skills to carry out the design, production and installation of his creations. Nicolas Lefebvre's sculptural work is destined to take on new forms: monumentality, in-situ, scenography, illustration, photography.

His new project in progress: MAMA crossroads of cultures, represents in Nicolas' creation, the passage from the individual to the whole always in a concern of unification. The message is the same, only the scale changes. It passes from the human symbol (the woman, fertility) to that of the Earth (the Mother, source of all life and cradle of all civilizations). MAMA is an itinerant work that rotates at the speed of our planet. Intended to travel, this circular receptacle will successively welcome the earth of the countries hosting the installation. On this plateau, ancient objects from all over the world will come together to celebrate our common roots.