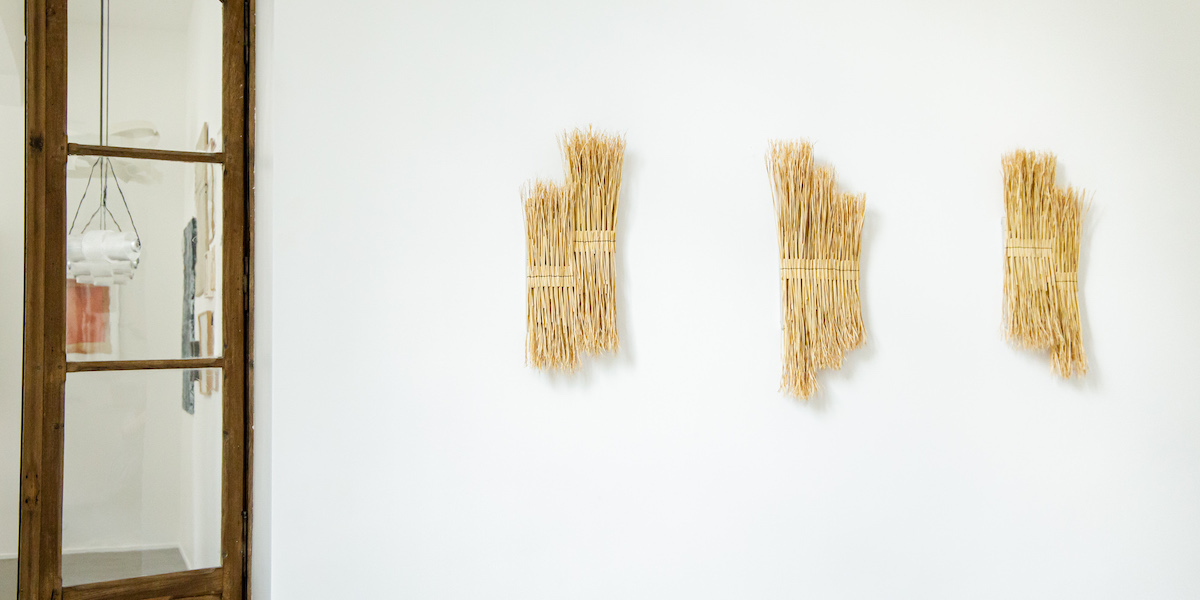 Based in Tokyo, ARKO is a self-described ‘straw artist’ who has been applying her creative approach to traditional craft since 2002. Her use of natural materials and age-old techniques reinsert fading customs back into modern life. Finalist for the LOEWE Craft Prize 2018.

The artwork is crafted from a bunch of rice straws. Rice straw is the vegetative part of the rice plant which is separated from the grains and dehydrated after harvesting. The straw as a byproduct of rice is mainly made efficient use of its materials in various forms in the geographic area from East Asia to South Asia where mainly consumes rice as their staple foods. In Japan, straw played a large role in everyday life not only as an agricultural feedstuff but also as the raw materials of Japanese style straw shoes, straw coats, blankets, food wrappers, carrier bags and all that. However, it was until a hundred years before present. Nowadays, straw work is merely used for making a straw festoon called “Shimenawa”, which is a holy ornament for a New Year ceremony in the Shinto style in Japan. It is normally hanged on the door for a couple of weeks during the year-end and New Year season. Hence, it has been almost faded out in modern life particularly in the city area, but it doesn’t mean the change of living on rice.

Actually, the more rice cropped, the more straw generated. It is obvious fact that Japanese food culture is originally based on the riceeating culture and it builds a multiple of customs, habitude and national characteristics. Therefore, the artist became to face straws to seek the heart of ethnic identity. The mainstream usage hitherto was weaving straws into something. I started thinking that it should be something new apart from the old traditions given that there must be a reason why straws vanished from our life.

Then I determined to take new measure of straw sewing in the raw instead of straw weaving and each straw is characterised as the line drawing. This artwork will sometimes a bit droop or give out a natural scent by getting heavily moist or dry respectively with the seasons. Apparently it would be a precious moment to feel that the straws one by one are used to be rice plants earlier. In other words, those were living creatures in fact.

In modern days, certain products made with artificial materials or on the premise of environmental contamination are produced and discarded on a large scale as an alternative to straws. This artwork is different from ritualistic creation by any means though, it could inspire feelings of natural providence or the mighty power of natural life forms, which are often overlooked in the current business-oriented society.