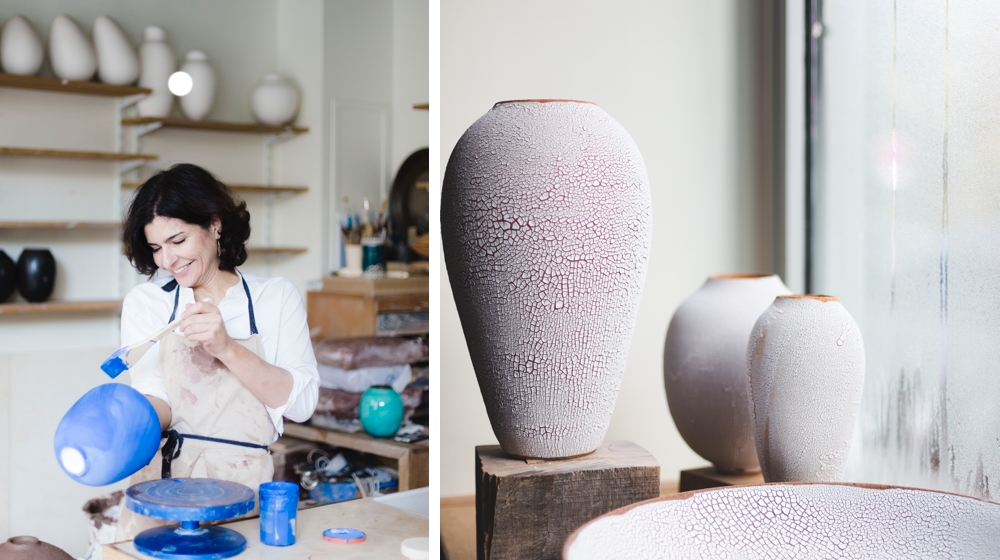 As an ESCP-EAP business school graduate, Karen Swami has led a career that has taken her from the world of finance to film production, yet never without a potter’s wheel at hand. Her passion for clay began at the age of 5 and never stopped. In parallel to her studies, she gained a certificate of professional competence. Increasingly larger pieces slowly invaded her space and her time, seducing art collectors and propelling her forward into the world of ceramic art. Black stoneware, white bisque porcelain, cobalt blue or celadon-green, colours and shapes reminiscent of ancient dynasties have made their way into her work.

Karen Swami, born in 1970, graduated from the ESCP-EAP and has a potter's diploma. Her professional career began in the world of finance and film production.

But more than ever, she is committed to spreading positive vibrations around her through her stringed vases. She has gradually succeeded in breaking away from the traditional pattern of ceramics to give vases a large-scale architectural dimension. In this she is close to Pierre Soulages with the black and white striated porcelain vase made by the Manufacture Nationale de Sèvres

The English, great art lovers, have understood this, rushing to the Dior House in London where functional and stylish ceramics are displayed on shelves, values of excellence.

It was in the world's showrooms that she became an accomplice of Alberto Pinto and Christian Liaigre, and that a high-profile collaboration was born between the great decorator and sofa maker and her productions, propelling her to the forefront.